Why We Worship On Sundays And Not Saturdays

In the Old Testament, we read in Exodus 20:8-10 concerning the Sabbath. It says:

"Remember the Sabbath day, to keep it holy. Six days you shall labor and do all your work, but the seventh day is a Sabbath of the Lord your God; in it you shall not do any work, you or your son or your daughter, your male or your female servant or your cattle or your sojourner who stays with you,"

There are those who are ready to tell you that the reason for the shift is because the Catholic Church through Emperor Constantine decided to make Sunday the day of worship following the pagan feast they call the feast of the Sun-god. They will also tell you that worshipping on Sunday is not biblical, and as such when you worship on Sunday, you worship the pagan god.

hmmmm! Let's take a deep breath! I am making this post so that you can always keep it as reference or to share it with people ready to learn.

Prior to the death and resurrection of Christ. The first day of the week which we now call Sundays does not have much significance until we read in Matthew 28:1 concerning Mary Magdalene.

"Now after the Sabbath, as it began to dawn toward the FIRST DAY OF THE WEEK, Mary Magdalene and the other Mary came to look at the grave."

Then, we were told in all the gospels that Christ rose from the dead on that FIRST DAY OF THE WEEK.(Mark 16: 9).

Gradually, the very fact that the resurrection took place that first day of the week, it soon became something very significant for the early Christians. The resurrection was and it is still a big deal, something no one has ever done. And truly, what sets Christians apart from others is simply their believe in the resurrection of Christ. Without it, they have nothing to talk about.

To make it even more dramatic, in Luke 24:14 Jesus appeared to two disciples on their way to Emmaus and broke bread with them. That day was the first day of the week, on a Sunday. 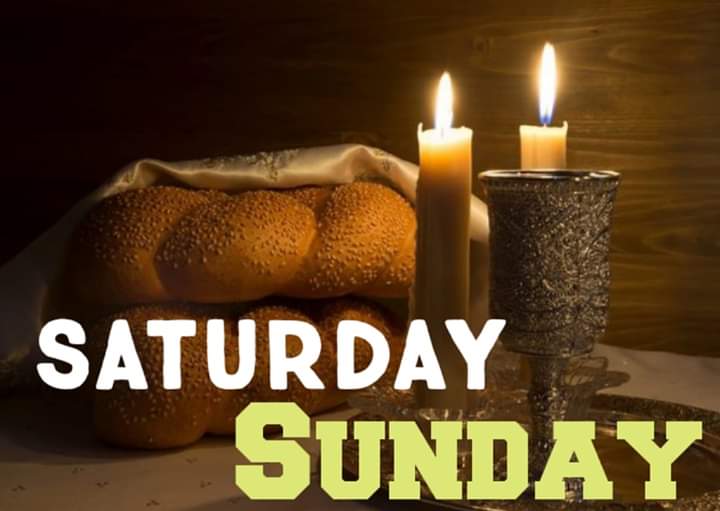 As if that is not enough, the disciples started gathering together and Jesus will appear to them on the first day of the week.

"So when it was evening on that day, THE FIRST DAY OF THE WEEK, and when the doors were shut where the disciples were, for fear of the Jews, Jesus came and stood in their midst and said to them, "Peace be with you.""

On that visit of Christ as recorded in  John 20:19, do you know that Thomas was not with the disciples on that day? And when he came back and was told, he refused to believe.

Here is the most astonishing part. Jesus had to wait for the next week, the first day of the week, before he appeared to show himself to Thomas. Why? Something for us to reflect on. Read for yourself.

"A WEEK LATER his disciples were in the house again, and Thomas was with them. Though the doors were locked, Jesus came and stood among them and said, “Peace be with you!”"

For some of you who are interested in research, please find time and google "The Didache" also known as "The Lord's Teaching Through the Twelve Apostles to the Nation". Take your time and read it. It was written in the first century and contains an account of how the first Christians saw themselves, what they did during their meetings, the day of the week they were meeting, and what they taught. This will open your eyes to how the early Christians worshipped. The documents is an archeological fact for those that want to doubt its authenticity.

What brought me to mentioning "The Didache" is to show you that though the early disciples still tried keeping the Sabbath, but they still gathered on the first day of the week for the breaking of bread. Even the book of Act 20:7 recorded it.

At some point, St Paul even gave us a clear hint in 1 Corinthians 16:1-2 that the first day of the week was the day they usually gather to pray.

Hear Paul as he writes to the Corinthians:

"Now concerning the collection for the saints, as I directed the churches of Galatia, so do you also. On the FIRST DAY OF EVERY WEEK each one of you is to put aside and save, as he may prosper, so that no collections be made when I come."

It did not take long, this first day of the week was now referred to as "The day of the Lord" by the early disciples. You can check Revelation 1: 10. Even the Didache I told you about, talked about it.

Do I need to remind you all the importance of the resurrection? Formerly it was just an ordinary first day of the week, but Christ turned it to an Easter. As such, every Sunday became a "small Easter", such that it naturally took over Saturday.

Why did God decided to send the holy Spirit on the apostles on the Pentecost day, a day where farmers were supposed to gather in accordance to the Jewish law of Leviticus 23:15-22? To Make it even more shocking, that day was on a Sunday. All Jewish Pentecosts were celebrated on the first day of the week (Sunday). Make the calculation yourself and you will see.

Now here is the summary: Christ rose on the first day of the week. God sent the Holy Spirit on the apostles in which more than 3000 souls were converted, and it was on the first day of the week. Two very important days for all Christians: The birth of the church on Pentecost and the salvation of the world on the day he rose. Both happened on Sundays.

Can you now see why it did not take long for the Sabbath to start losing its significance on the early Christians because they have seen something bigger than the Sabbath. They saw Christ himself, the Holy Trinity. They were no longer held bound by the law. They abandoned some of the practices of the Jews whom do not even believe that Jesus is the saviour not to talk of resurrection from the dead. This is why in the NT, even tithe was not binding and was not talked about among the early Christians.

Friends, to say that it was Constantine that made us to start worshipping on Sundays will amount to a show of ignorance of the scriptures and undermining the power of the resurrection and even worst still, giving Constantine the powers that he does not posses.

And if they say Sunday is a day of worship of the pagan Sun-god and that the meaning of Sunday came from the Sun-god, then it is important we remind ourselves that the Jews as at that time of Jesus do not have names for the days of the week as we do today. This is why you will often hear them say, the first day of the week, the sixth day, the seventh Etc. This is exactly what played out during the creation story.

Even the word Sabbath is simply a description. Sabbath is from the Hebrew "shabbat" meaning "to rest." This is why even when the bible mentioned 7th day, it will still use the word Sabbath to describe it as the day of rest. "Six days you shall labor and do all your work, but the seventh day is a Sabbath of the Lord your God." Exodus 20:8.

There is this impression from some Pentecostals Christians of today that once anything has a pagan origin it is evil and it is impossible for it to be 'Christianized.' This is the origin of the fight concerning the celebration of Christmas here on social media.

Well, unfortunately, many things came from the pagans, including the papyrus that was used to write the bible in those days. The tradition of offering visitors kolanut in Igbo culture is largely pagan. Even Baptism as we know it today as pouring of water or immersion in rivers did not start with Christians.

What these so called "highly spiritual" Pentecostals fail to see is that the christian faith must be planted in a culture for it to take root. Even St Paul while preaching to the Areopagus in Act 17:16-34 had to use what the Athens have as an altar to the "unknown god", to plant the message of the living and known God into them.

Friends, the point is, once the Christian faith is planted in any culture, it uproots the bad in it and retains the good. This is why once you mention "Sunday" we think about the day of worship in church and not sun-god. This is why 25th December may not be the day Christ was born, but it has taken a Christian dimension pushing aside whatever it was known with before. This is why the cross that was seen as a symbol of shame, once it is mentioned today, it is seen as a symbol of liberation and of glory.