I want to tell you how you can get admitted into a MS or PhD program in the USA with a Nigerian HND or its equivalent. Also, If you finished your BSc with a Low GPA (< 3.0 on a 4.0 scale, for example), you might still have a chance at your choice program. 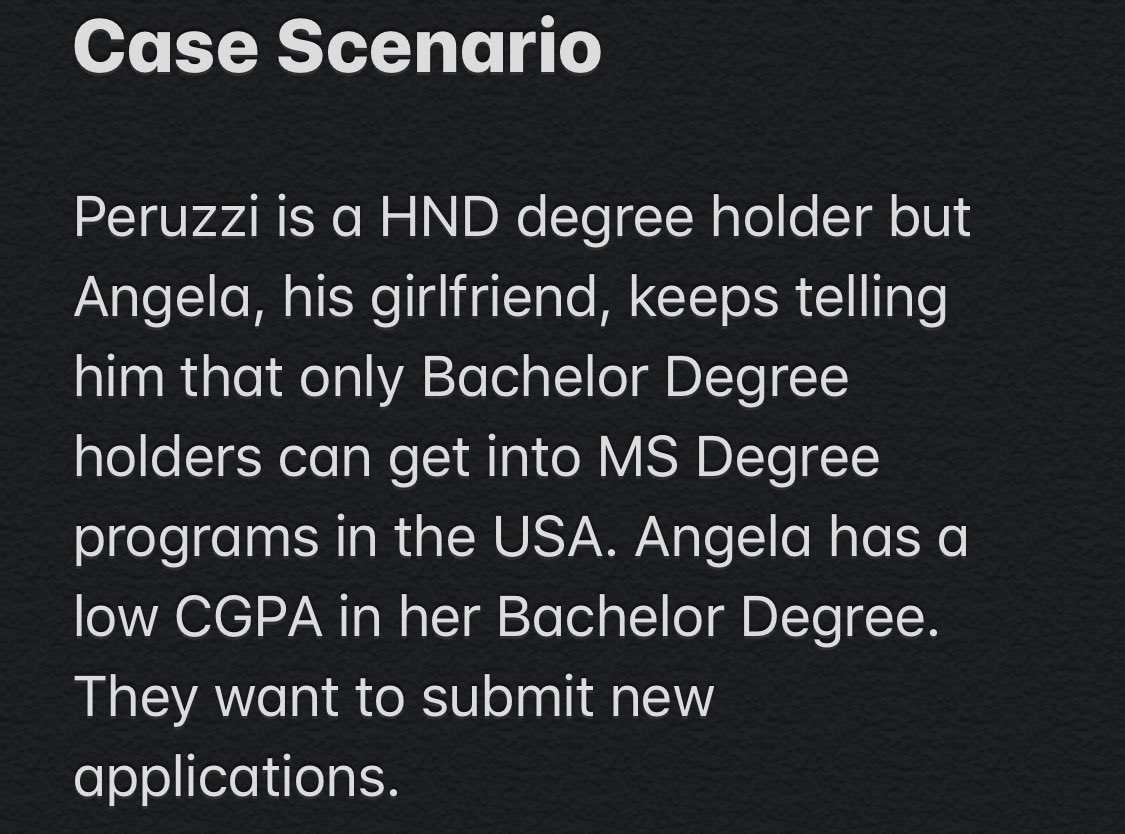 With what I am going to explain to you, be rest assured that you are not going to do anything out of the ordinary. Information is power and with this, you are going to be fine. You may not need to worry about your low grade. With your HND, you may just be on your way to USA.

The closest and most recent Nigerian HND graduate I know of who is pursuing a master’s degree at a U.S. university as of the time writing this column is a man who graduated from the Institute of Management and Technology, Enugu,with an HND in mass communication. He is, incidentally, studying for his master’s degree in communication at the University of Louisiana—my alma mater.

I once narrated the story of an HND graduate from Canada whose qualification was mistaken for a master’s degree at the University of New Orleans. This confusion arose, perhaps, because in American English “diploma” is the generic word for a document certifying the successful completion of any course of study. It’s equivalent to what we call “certificate” in British and Nigerian English. (Even the document certifying the completion of the PhD is called a “diploma” here).

Given that background, it’s easy to understand how a “higher diploma” would be mistaken for an advanced degree. But that’s not the only reason why HNDs are not discriminated against in American universities. There are at least four other reasons.

First off, let it be known that the American university system has no concept of the HND. Institutions of higher education here just award associate, bachelor’s, master’s and PhD degrees. Associate degrees are awarded only by “community colleges” after two years of study. They are, in some sense, equivalent to our Ordinary National Diploma (OND) or, perhaps, British and Nigerian “A” levels.

Now, it is also usual for American colleges and universities to have the word “polytechnic” in their names even though they bear no resemblance whatsoever with the British and Nigerian concept of polytechnic. For example, 15 miles north of Atlanta, there is a school called the Southern Polytechnic State University, which awards bachelor’s and master’s degrees in technical and vocational fields, the humanities, the social sciences and the sciences.

So when somebody comes to America with a qualification from a “polytechnic,” it’s likely to be regarded as the equivalent of a university degree since universities in America, as you have seen, can also be known as “polytechnics.” That’s probably the second reason why HNDs from Nigerian polytechnics and elsewhere are not discriminated against here.

The third possible reason why HNDs are not discriminated against by many U.S. universities is because the qualification is awarded after four years of post-secondary education. When you add to this the fact that these “higher diplomas” are given by “polytechnics” (a name often associated with universities here) it’s easy to understand why HNDs are easily accepted as the equivalent of a bachelor’s degree.

Lastly, as I once mentioned on this page,admission to graduate schools in U.S. universities is often the result of a multi-faceted process. The most important of this process, however, is getting an acceptable score in the Graduate Records Examination (GRE). So even if you have an HND but received very high scores in the GRE you have a greater chance to get into graduate programs in U.S. universities than someone with a first-class degree from a university but with low GRE scores.

In the UK from where we inherited the tradition of HNDs, polytechnics have been discontinued since 1992. They have all transmuted into universities both in name and curriculum. As you would expect, HND holders still face discrimination in UK universities. In other words, U.S. universities are more welcoming to HND graduates than UK universities are.

This is what you are simply going to do. You are going to consider re-evaluating your HND or/and Bachelor of Science degree via an education service.

You are going to submit your current HND or BSc Transcript to a reputable and accepted organization for a credential evaluation. According to @usnews, “a credential evaluation is a report that provides a comparison of a student's academic credentials earned in another country to the U.S.A. educational system”.

See it like this: After the evaluation, you are basically applying to USA schools with the Bachelor Degree equivalent of your HND, in form of the “evaluation report”. This eliminates the dichotomy. Let me stress that you SHOULD contact the school prior to determine if they accept credential evaluation reports, and which organization’s report they prefer.

Remember to contact the school (via an email to the Graduate School) prior to choosing the service and starting the evaluating process at your end.

Now, let us consider the process in layman terms. I will discuss intently using one of the organizations as a case study. I am going to be exploring the process and service provided by @WESPicks @WESAdvisor. They are one of the major highly reputable organizations utilized for credential evaluation: WES credential evaluation. Before, I move into the Course Evaluation process in-depth, please consider two talking points below.

1. You should do a “Course-By-Course Evaluation” instead of a “Document by Document Evaluation”

See at as all your courses done being paired with same offered in USA schools. 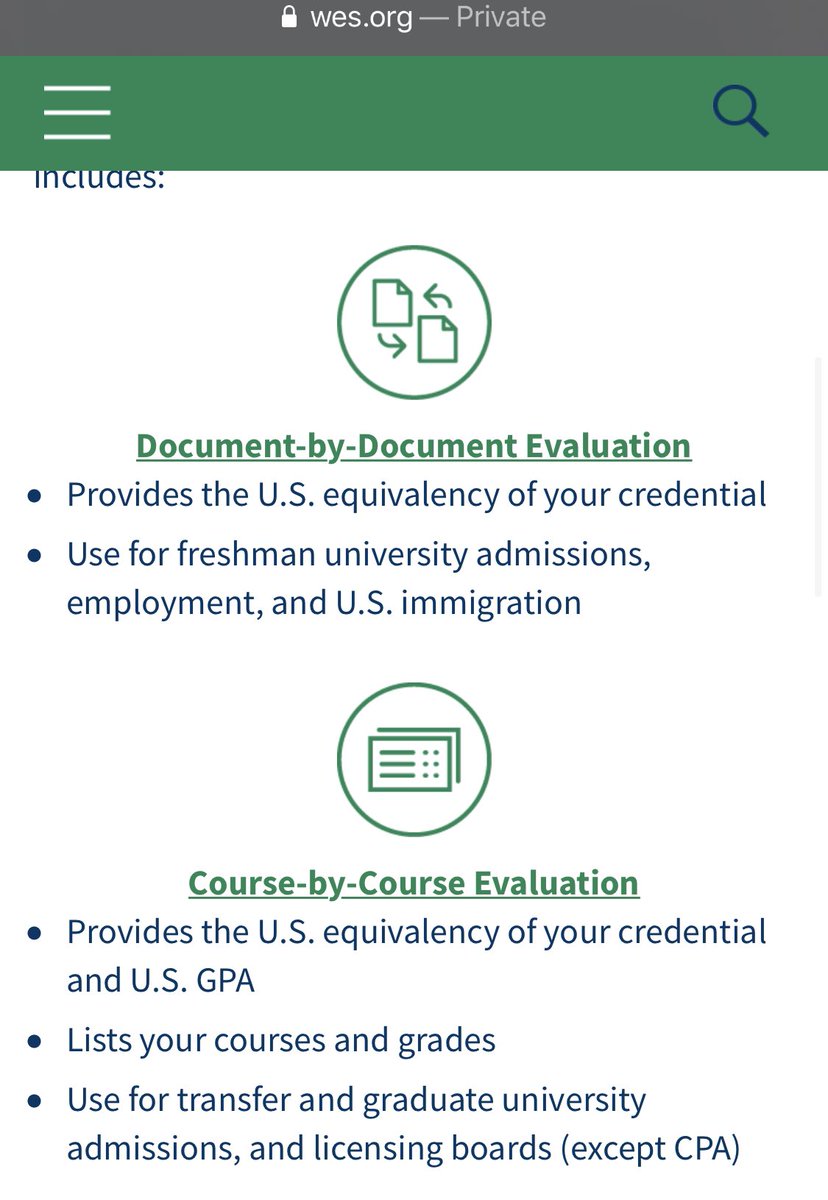 Remember all those external department courses you took back in the days (that probably reduced your CGPA)? There are cases where they are ignored in the course evaluation (because they are not offered in your program in the USA). This can lead to an INCREASE in your Final CGPA. This is where people (HND/BSc holders) with low GPA can get a much desired increase. In summary, the GPA of your course evaluation report may be HIGHER than what you currently have.

These testimonies have previously been recorded. See: What Is The Hnd Equivalent In Usa

If your degree was on a 5.0, 6.0 or 7.0 scales, you may convert them using the service below: WES iGPA Calculator . Now let's talk about the evaluation process

I will be using the @WESPicks platform to illustrate this. Stay with me.

The First Step is to visit Evaluations and Fees - Graduate Admissions

Here, you should select Education > Graduate Admissions. Typically, at WESPicks, Your evaluation will be completed in seven (7) business days after receipt, review, and approval of all documents, and payment in full. You will need to send A Copy of your Transcript from your University/Polytechnic to WES!

Here is what a Sample Evaluation report look like: WES credential and authentication report

After the evaluation, send it to your proposed school as part of your admission documents. You are good to go.